In the weeks since I released FriendBackup, there have been at least two other efforts(web sites) to accomplish the same goal. Since they were offering more than just backing up friends, it was about time I updated FriendBackup.

You can now backup followers, DMs, favorities and tweets in addition to your friends. Use care when downloading everything or you might max out. Because multiple streams are being backed up, I changed the file format to Excel (97/2000) to better group the data. Tweets, for instance, are on a different sheet from favorities and everything else. Here's the obligatory screen shot: 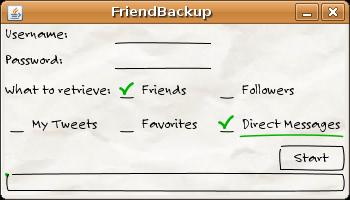 The next set of updates will probably store a lightweight file with the vitals so that if you run it today and again two weeks from now, it'll only download what is needed.

Unlike the backup websites, I don't have to promise you I won't keep your data because it never comes to me in the first place. All communication is between your machine and Twitter.