There are currently two Twitter clients on the Android Market, here's how they stacked up.

Twidroid was an early arrival to the Market. In previous versions it was plagued by instability and speed issues. For the most part, those issues have been resolved and the app is generally responsive. The Look and Feel was very polished and embodied what I would envision for a Twitter app, giving a nod to the LaF of Twitter.com while not being an overt copy. Integration with Twitter search was a nice touch but something is wrong with the background process that monitors tweets. It kept on vibrating the phone saying I had 20 new tweets when I had none. It was also not apparent on how to/if you could see anything older than your 20 most recent tweets. For power tweeters, having only the last 20 tweets is a serious problem. As advertised in the app, the camera function was buggy and had the peculiar requirement that the keyboard be slid out or the image was rotated 90 degrees to the left. 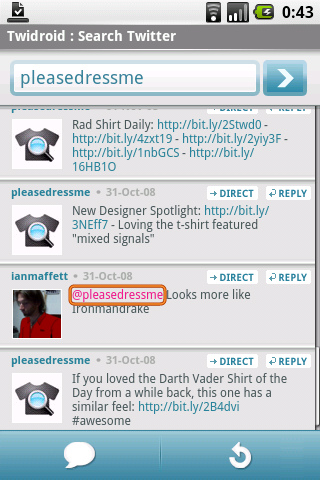 Twitli is a more recent addition to the Market and much more basic than Twidroid. Thematically, it takes some cues from Twitter.com giving a sense of familiarity. The menu that lets you navigate between timelines has text so small that people who fat finger might have better luck with the trackball. IMHO, a very ineffective use of screen real estate. The camera function, like Twidroid, is buggy as well and has the rotation issue.

Twidroid is almost there. That is, if you can deal with the erroneous alerts at times. Adding paging (or making it more apparent if it's currently possible) would make it probably 80% done. Twitli, on the other hand, needs a lot of usability work to make it adequate. I would recommend using the regular Twitter site, maybe Twidroid if you're a light Tweeter.