The ideas get pitched and people start to pick teams. On a good day, you end up with a nice mix of designers and developers. You might have the pedigree but a less experienced but nimble team can upset you. The starter gun is fired and work begins.

Your fully realized team is slogging through the mud pits, pulling the stragglers along. You can't let the team slow to the slowest person's pace but have to find out what they can do and then push for 10%-20% more again and again until they are keeping pace. You simply can't do that in a gym. You know what most of the apparatus will be upon entry. With a hackathon, you only have a rough lay of the land and don't know the curve balls the organizers will throw at you. 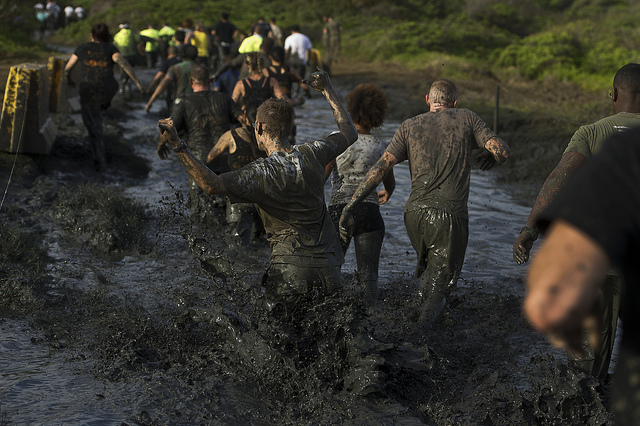 You can go to the gym alone and make decent progress if you work at it. But not so much at a hackathon. At almost every hackathon I've attended, there has inevitably been the single man team who pitched an idea that was far out there and couldn't make it compelling or compromise enough to attract people. And instead of joining another team, he pridefully goes it alone or quits. That's not to say that one can't do it but scaling a 15 ft wall is a whole lot easier with someone to give you a boost.

For me, the perfect hackathon has a decent but not overwhelming ratio of novices to experienced people, some curveballs, a ban on bringing pre-existing projects, are not prone to Pokémon behavior(gotta use all these APIs from the sponsors), and low attribution rates(helpful if you can't leave like in the case of StartupBus).